The four sculptures depict man at work in various fields through which he might express his creative drive. The figures are mounted on the east wall of the Mayo Building. The figures were planned so that a rhythmic flow of line would carry the eye from one figure to another. Live models were used to perfect form and position. On the upper left, the Thinker or Dreamer symbolizes the philosopher, artist, leader or scientist. He is the enlightened man who, in turn, enlightens others. The upper right figure represents Makers or Doers. Here the vast number of people involved in making, building and producing goods of all types are represented. On the lower left, the artist sculpted Mother and Child to symbolize care, education, standards of morals, faith and religious attitudes, concerned for the welfare of those who might depend upon others. The Purveyor or Transporter on the lower right represents the farmers and shippers. The important role of all those involved in the assembling of produce, materials and objects for consumption is expressed by the man gathering the net.

William Zorach, born in Lithuania in 1887 came to the United States with his parents at the age of four. The family moved to Cleveland. As a youngster, William began carving on fences and barn walls, and decorating books, papers or any available surface with his sketches. He worked at various jobs to help support a family of nine brothers and sisters. Lack of funds forced Zorach to leave school at age 13 to become an apprentice in a lithographing studio. He eventually saved enough money to study art in New York. In 1910, his ability as a painter provided an opportunity to go to Paris for further study. Never completely successful as a painter, Zorach even failed in an attempt to make a living at commercial art. In 1917, he began experimenting with sculpture and by 1922 was completely absorbed in the medium which he considered "the complete art form". Zorach's figurative sculptures are now recognized as realistic works, but he was considered wildly modern by his contemporaries. His painting and sculpting were influenced by the cubists and fauvists, who were creating a revolution in modern European painting during his active years. William Zorach used life around him as a model for his work. Frequent subjects were his wife and two children. In his autobiography he noted, "...my sculpture is based upon my life and the people and things around me that I loved. They were my life. Through them I came near to all human beings. I realized my art through them." Before his death in 1966, Zorach had become a major American sculptor. One of his famous works, "Mother and Child", won the Logan medal of the Chicago Art Institute and was purchased by the Metropolitan Museum of Art. Other major works are "The Spirit of the Dance", done by Radio City Music Hall in 1932, and "Benjamin Franklin", which stands in the Post Office Department Building in Washington, D.C. Zorach was a member of the national Institute of Arts and Letters, the topmost honor this country can confer on an artist. 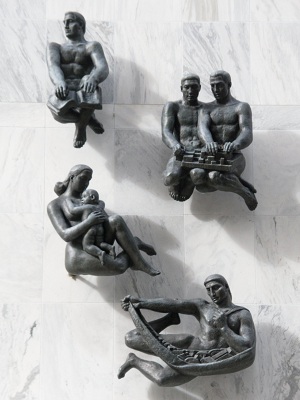