Each Plummer Building door weighs 4000 lb, stands 16 ft high, and is 5½ in thick. The doors consist of forty-two 18 × 21-inch panels. Six repeating symbolic panels and 2 repeating ornamental patterns are interspersed throughout each door. The symbolic panels show a woman kneeling next to her child to represent maternity and the home, a figure holding an overflowing cornucopia and a shock of wheat to represent agriculture, a figure with a paint palette and brushes to represent the fine arts, a figure with a lamp and scroll to represent education, and a figure with a hook and crane to represent the mechanical arts. The ornamental panels have a central button surrounded by floral patterns and smaller etchings of flora and fauna (e.g., squirrels, pinecones) indigenous to Minnesota. The central buttons depict either a turkey or the face of a Native American. The intent of the original designers was that these doors would be closed at the end of each clinic business day. However, the closing of the doors has instead become a memorial to important historical events or a tribute to the memory of a famous or influential person. Some events that have received this honor include the deaths of Drs. William J. and Charles H. Mayo (1939), the assassination of President John F. Kennedy (1963), and most recently, in commemoration of the victims of the terrorist attacks on the World Trade Center on September 11, 2001.

Charles (Carlo) Brioschi (1879-1941) was born in Milan, Italy, and received his education at the Brera School of Art in Milan, where he specialized in architecture and sculpture. He immigrated to the United States in 1899 and moved to the Minneapolis-St Paul, MN, area in 1909. His employer's company was retained by Ellerbe & Company, St Paul, the architectural firm charged with designing and constructing the Plummer Building. In a letter dated July 28, 1961, Brioschi's son noted that Brioschi created many of the designs and models for the bronze doors while hospitalized at the Kahler Hospital in Rochester, MN. 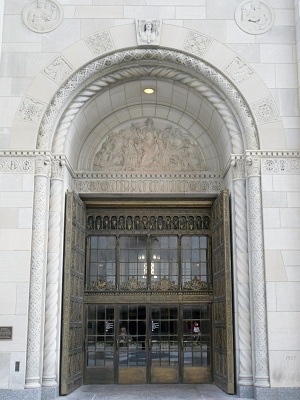