The three groups of sculpture on the south façade of the Mayo Building represent man at rest and at play. Cyclists, on the left, typify one of the more physical activities by which man can restore and refresh himself. The center figures depict a typical family unit during a joyful moment. On the right, the three bathers are symbolic of the introspective, reflective avenues of rejuvenation. Pattison suggests the enjoyment of nature with the representations of water and foliage.

Painter and sculptor Abbott Pattison has been actively creating and teaching art in America and in Europe since the early 1950's. After graduating from Yale College and Yale School of Fine Arts in 1939, Pattison traveled to China and Japan. Three years in the U.S. Navy followed, at which time he served as captain of a destroyer escort. In the 1950's, Pattison served as sculptor-in-residence at the University of Georgia, worked in France and then in Italy. Since the 1950's, he has been devoted full-time to sculpting and painting. An active, exploring mind makes Pattison's sculptural styles vary considerably. He tends towards abstraction, creating new orders of images from the natural world. Adding texture and varying forms, he works on several levels of abstraction from expressionism to the purely non-objective. Beginning with an understanding of natural form, he is able to modify that form to create a more powerful or moving image - an image which can be more meaningful to modern man. In the United States, Pattison's activity has been centered in the Chicago area, close to his Winnetka home, although exhibitions of his works have been held in museums and galleries throughout the country. Pattison's works can usually be seen in summer exhibitions in Maine, where he spends part of the year. Permanent museum collections are in the Art Institute of Chicago, Whitney Museum in New York City, Israeli State Museum, Corcoran Museum in Washington, D.C. and the St. Paul Art Center among many others. 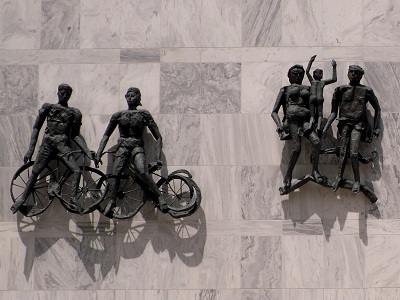