The period during 1960-1969, during which time "Four-Square (walk through)" was executed, was a most important one in the sculptor's life. Ideas matured and studio space became available so that the range and scale of works broadened considerably. Over 200 works were produced during the period - almost as many as during the previous 35 years. "Four-Square (walk through)" is considered one of Hepworth's most successful works of the period during which she attempted to work in a much larger format than was previously possible. The artist's career was cut short by her death in a fire in 1975. "Four-Square (walk through)" is a fifteen foot cast bronze sculpture. The work was given to Mayo Clinic in 1979 by the family of Constantine P. Goulandris of Greece as a memorial to him.

The cast bronze sculpture "Four-Square (walk through)" was created by an artist who is considered by many art historians to be one of the most influential artists of the twentieth century. She was a pioneer producing some of the earliest abstract sculptures in England, but her most important achievement was the creation of lyrical forms springing from nature which became universal images through her interpretation. She created a vocabulary of shapes which influenced a whole generation of sculptors and was one of the century's great carvers. Her work was characterized by a masterly sense of materials, perfection of finish and subtlety of rhythm. Born in 1903, Hepworth was fascinated from early childhood with natural forms and textures. At age fifteen, she decided to become a sculptor and enrolled in the Leeds School of Art where she befriended English Sculptor Henry Moore who was also a student. This meeting led to a lifelong friendship and reciprocal influence as the careers of the two artists developed. In the 1920's, Hepworth attended the Royal College of Art in London after which she won a three-year scholarship to study art in Italy. While Barbara Hepworth's earliest sculptures were naturalistic, she was eventually influenced by the work of Constantin Brancusi, Jean Arp and Piet Mondrian. By the 1930's, her sculpture had become entirely abstract with allusion to landscape remaining an important force. In 1933 Hepworth married English abstract painter Ben Nicholson under whose influence she began also to make severe, geometrical pieces. As her sculpture matured, Hepworth became interested in the counter-play of mass and space in sculpture. Pieces became increasingly open, hollowed out and variously perforated so that the interior space became as important as the surrounding mass. This idea has remained an important part of her message. 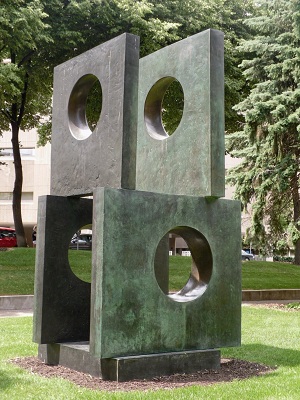